"Ghostradio is a pysical mechanism that generates random numbers by chance. this unit works on the boundaries of the causal world and beyond. we are publishing this random numbers datastream for cryptographic keygeneration. this will release the public from the current state of surveillance. When descartes described his foundation of the political enlightenment in the sentence, i think, therefore i am, he accidently creates the new metaphor for the machine age, in the aftermath of the industrial revolution and pure reason. centuries later the macy conferences introduced the concept of cybernetics to the field of science, and the principle of thouth was described by computing, command control circuits and dataprocessing as man-machine. rationality and objectification was the ideal of this culture. ..." a fieldtest by Pamela Neuwirth, Franz Xaver (Stadtwerkstatt) and Markus Decker. 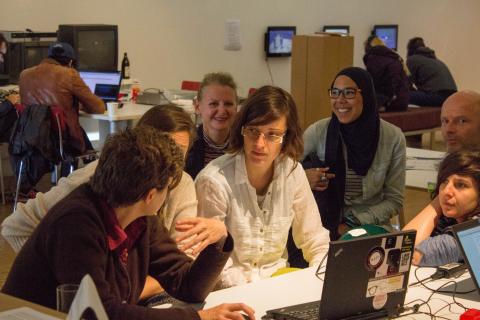 Autonomy (im)possible? Date: 28.05 – 31.05.2014 Uncovering new truths and making them public as a disruption and criticism of the dominant system has consequences. Threat scenarios of the digital surveillance state inevitably have palpable effects on our lives and actions. Access to information, infrastructure and technology, which is especially important for activists in repressive regimes up to the present, has become a widely discussed issue since Snowden’s disclosures at the latest, because now a broad mass of people in democratically governed states see their “privacy” endangered. Independence, confidence and freedom are massively put to the test. How do creative actors contribute to the process of change and which new forms of cooperation do they enter into?