Workshop: "From the democratization of cryptography to the appearance of cryptocurrencies" 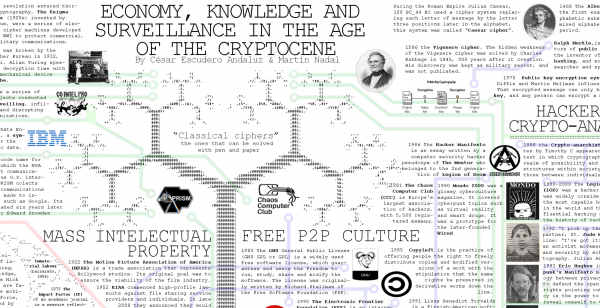 Economy, Knowledge and Surveillance have been placed at the service of production, describing a new expression of power generated by the accumulation of information in the networked world. This historical context of relations between intellectual property, piracy, consumption goods and homogeneity of money is counterbalanced by cultural movements and communities defending the open society, proposing free access to information and speculating with non-monetary futures.

This is a Workshop addressed to those who have concerns with Media Art, Digital culture, Critical Economy and research to create a diagram which traces the democratization of cryptography and the appearance of cryptocurrencies as probably the most influential events of what we have called the ‘Cryptocene’. The Cryptocene can be understood as a period of time featured by a significant use of cryptographic systems and its impact on the surface of the Earth with ecological, economical and political consequences.

The diagram––in its current manifestation in print measures 100x70cm––shows data, color-encoded, and annotated with keywords that are considered relevant for the coming into being of the information society. The advantage of the diagram as a format is that it provides a framework for an inquiry that is, at the same time, internally coherent and open to heterogeneous inputs and outputs. This project provides complementary and competing pathways through Economy, Knowledge and Surveillance in the Age of the Cryptocene.

The workshop starts with an explanation of the diagram and the concepts it embodies. Participants will become familiar with a historical, Crypto-Hacker method. In a second step, Participants will conduct own research and position themselves and their practice in relation to the overall historical development depicted on the diagram.  In 1988 the Crypto-anarchist Manifesto written by Timothy C, appeared as a premonitory text in which cryptography reshapes the realm of possibility and redefines power structures within society, especially those between individuals and governments. Three years later Phil Zimmermann developed Pretty Good Privacy (PGP) used for signing, encrypting, and decrypting texts, e-mails, files, directories, and whole disk partitions increasing the security of e-mail communications. Eric Hughes in A Cypherpunk’s Manifesto(1993), makes an analogy between privacy and secrecy to defend the open society rights, pointing out that privacy is the power to selectively reveal oneself to the world.

Economy, Knowledge and Surveillance in the Age of the Cryptocene is an informal research which was initiated by Martín Nadal and César Escudero Andaluz in November 2017. It currently comprises about 2 core members and about 2 contributors who work as artists, theoreticians, curators or journalists inside and outside major institutions.

Martín Nadal (BSc) is an artist/developer based in Linz and studying the Interface Cultures program at KunstUni. In the past years he has collaborated in a variety of projects and taught some workshops related to art and technology. He is also interested in illustration and cinematography. His works have been shown at Visualizar 11 (Medialab Prado), Ars Electronica, AMRO Festival y Settimana della Scienza (Genova), IAMAS (jp).